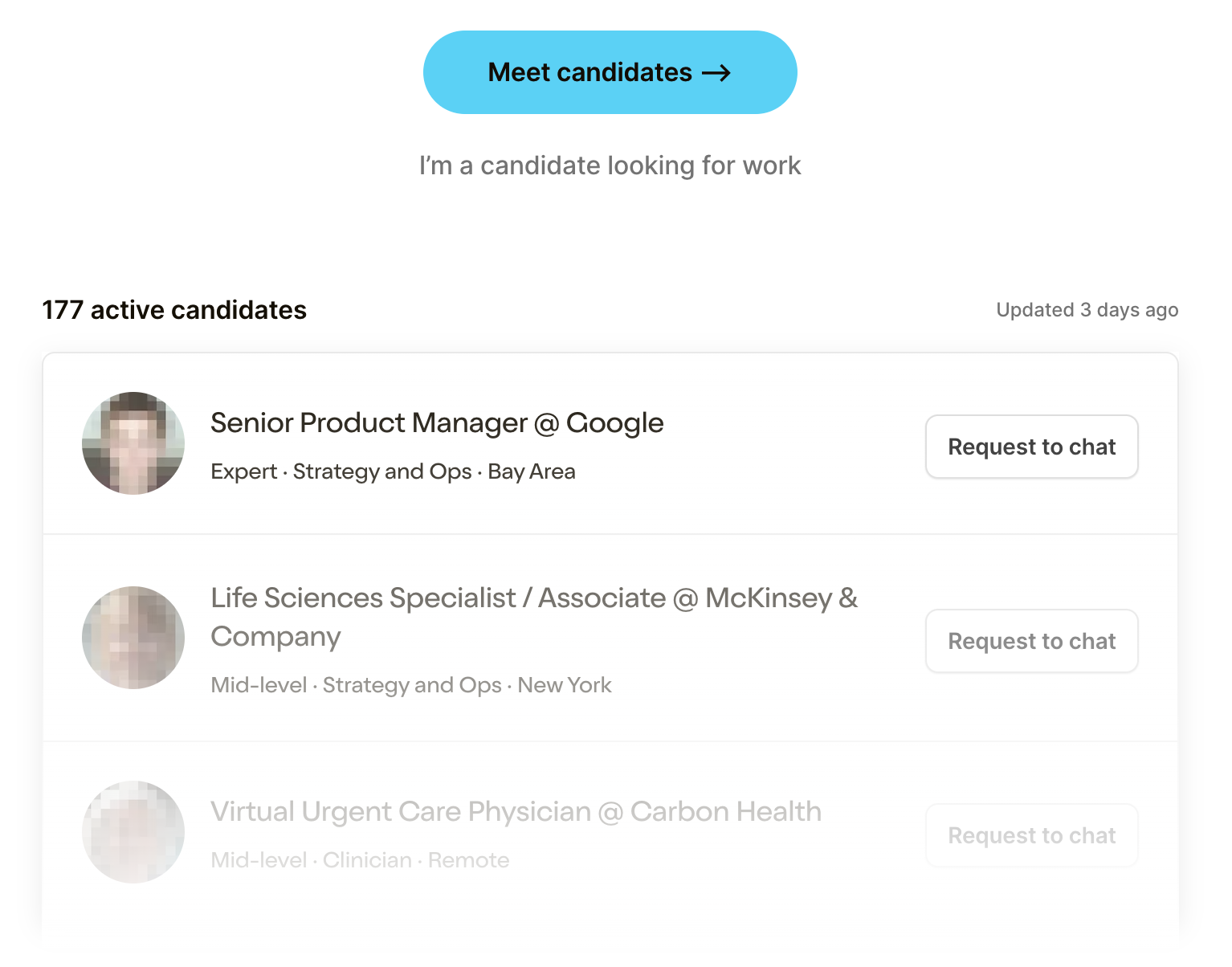 Let me run you through a recent train of thought I’ve been having about what personalized health insurance products might look like. Follow me on this journey.

I’m generally a fan of Medicare Advantage (MA). For the uninitiated, this is when the government contracts with private insurers to manage the health of Medicare enrollees. In an extremely simplified version, these carriers get paid a flat fee which is some base amount that gets multiplied by how sick the patient is.

But Medicare Advantage has several other quirks to it that are important to note:

Because of this, there’s an interesting trend where MA plans are trying to attract more and more niche populations. This includes wrapping around different “front door of healthcare” options (e.g. pharmacists, integrative medicine physicians, etc.), reducing co-pays for different services (e.g. acupuncturists, herbal supplements), putting an emphasis on the languages physicians in their network speak, and more.

There are a few key advantages by creating more targeted insurance products. For one it becomes easier to target your marketing and potentially get word of mouth effects as beneficiaries refer others in their community who might have similar needs. Also if the goal is to keep consistent tabs on your beneficiaries so they don’t end up in the hospital, you want to make sure they regularly go to whatever their version of primary care is.

Here is a bit about Alignment Healthcare, who’s planning to create several different demographic targeted plans under the larger umbrella.

“Alignment Healthcare personalizes these plans by adding benefits that target social determinants of health, like a pre-paid debit card some HMO enrollees can use to buy health and grocery products or to install a home security system. In California, the company created a benefit package called Harmony for Asian-American policyholders. Beginning with that population was natural, Kao said, because he was born in Taiwan and has a personal interest in the wellbeing of Asian-Americans.

Beyond demographics, Medicare Advantage also has a subset of available plans called Chronic Special Needs Plans (C-SNPs). These are plans that design their network, prescription tiers, cost-sharing (e.g. $0 premiums for certain things), and supplemental benefits to target Medicare beneficiaries that have one of 15 designated conditions. For many people, most of their care revolves around the management of a specific condition, and these insurance products cater to that. After a few years of contraction, C-SNPs seem to be growing in the last few years (you can see some examples from Anthem here).

In general, I like this trend of targeted insurance products. I think it actually allows buyers to find plans based what they’ll actually use regularly aka. primary care-esque things and lifestyle benefits. I expect more personalized insurance products to take off in MA.

Personalized Insurance In Other Markets?

This train of thought now takes me to the next point, which is my belief that more insurance segments will eventually start looking like Medicare Advantage and employment/insurance coverage will have a way weaker tie in the near future.

Specifically my hope is that in the individual exchanges you’ll eventually see:

Yes, these are high hopes. Employers are really deep in it when it comes to health insurance. But there are some promising signs. The courts ruled “ACA good”. The boy JB has increased subsidies to help people afford their premiums on the exchanges. There were talks of a public insurance option in different states like Washington, Colorado, and Nevada. ICHRAs...exist (I’m hoping they see more adoption because they let employers give their employees their tax-benefitted dollars to buy plans on the exchange). More companies going remote means less geographic density in any one place so they might find it easier to let employees buy on their local exchange instead of trying to fit everyone into a national plan.

Plus enrollment seems to be trending back up after a few lulled years + the margins per member also seem to be going up. So plans like Aetna and United that left the exchanges are starting to look back at it (feat. A Boogie Wit Da Hoodie).

Beyond that, I think employees are pretty tired of the options they have available through their employer. These are plans designed to be “good enough for the bulk of your employees” but not great for anyone. Combined with a tight labor market, maybe employers are more open to letting their employees find plans that work for them.

I’m optimistic about the individual exchange and expect it to be one of the faster growing markets. I’m also hoping that it means we’ll see more of these personalized plans popping up as a result as well if the shopping behavior tracks at all similarly to Medicare Advantage. This isn’t a totally novel idea - Cigna has a diabetes insurance plan for individuals, and CCHP is an integrated delivery system combining different health insurance products with providers at the Chinese Hospital, Chinese Community Health Resource Center (CCHRC), and Jade Health Care Medical Group.

My hope is we’ll see more of these targeted plans.

Who is building the new payer stack?

Rattling off some random functionalities that could help build the new payer stack:

There are so many more I’m probably missing. Sending patients materials, their insurance card, or explanation of benefits? Lob has a direct mail API. Wanna add an HSA? Throw in Lively or First Dollar. You can easily embed acute telemedicine services into any payer app with the million telemedicine companies like Teladoc, DrOnDemand, etc.

I’m sure there will be call centers that are easy for payers to plug into that triage the incoming call and escalate it to the correct person depending on how much clinical knowledge is necessary to answer member questions. Who’s building outsourced actuaries to help analyze insurers understand their member population risk in real-time (maybe Cerebrae)? Idk I’m riffing at this point.

I’m sure there are some grizzled healthcare vets who have lost any spark of joy in their eyes that will say “outsourcing, you invented outsourcing”. They’ll point me to some old school company with 50 consultants and one IT person, and claim it’s the same.

Third-Party Administrators (TPA) are companies that usually handle a lot of the above services. However most of them are designed to target the employer insurance market and suck to work with. This is especially true if you’re a small customer or want to build some sort of automated process that requires data passing between you and the TPA. Some of the newer TPAs that currently target the employer market like Flume Health might do this better + have a stack other payers can build on top of. But in general, it’s a very different business when you have two computers talking to each other vs. two people that have to schedule monthly check-ins to get anything done.

One of the benefits of having a new insurance stack is that it’ll be easier for new payers to keep their administrative costs low, which is important because individual exchange plans have to spend 80% of the premium dollars they collect on claims. The leftovers are usually slim pickings that go to admin and profit. This is also a reason why I think current health insurance carriers are reluctant to upgrade their infrastructure - because it’s usually a massive upfront cost which is hard to make work when you’re capped at 20% of your spend for admin stuff. The inability for incumbents to make massive infrastructure investments is an opportunity for new carriers that are building on top of a new stack from the beginning.

I know it’s a long shot to believe that we’ll see lots of new carriers on the exchanges. Oscar and Bright had to spend a bajillion dollars to get there with debatable success. Regulation makes it difficult to actually be flexible with plan design. If you attract a high-risk population you’ll go bankrupt. Member churn makes it difficult to invest in the health of patients. The market is still tiny. But it wouldn’t be any fun if we all agreed on trends right?

But my hope is that this plug-in infrastructure makes it easier to spin up plans and experiment with things like network design, covering different goods/services, and more. Today most people are pretty unhappy with what they get with their health insurance despite paying more every year. We should want more plans competing to give us more personalized options.

If you’re building a new targeted health plan or part of the stack that payers can build on top of let me know. I’d love to chat. We can confirm each other’s existing beliefs to further convince us we’re on the right track.

Nikhil aka. “I really need to stop relying on bullet points to articulate disjointed thoughts”

Thanks to Sahir Jaggi, Frank Wu, Jeff Yuan and Anonymous for reading drafts of this post

‍If you’re enjoying the newsletter, do me a solid and shoot this over to a friend or healthcare slack channel and tell them to sign up. The line between unemployment and founder of a startup is traction and whether your parents believe you have a job.